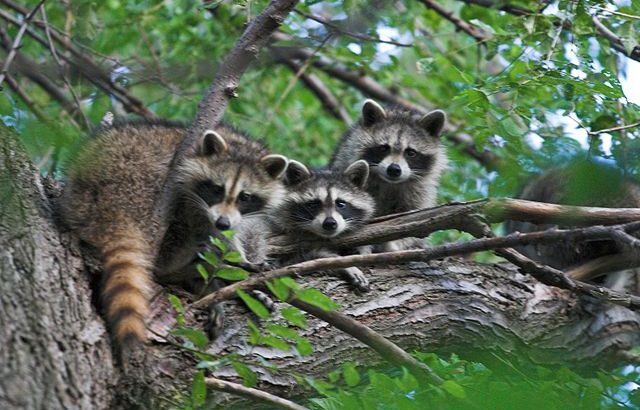 Since the 1970’s onwards, raccoons hiding out in attics have become a relatively frequent occurrence owing to urbanization. In about 80 percent of such cases, the raccoon is usually a mother nesting her young; all the more reason to strive to remove the raccoons in a humane manner. Some of the existing humane raccoon removal methods that can be used are discussed below.

The use of repellents is probably the easiest thing to try, especially if it is the first time dealing with the problem. As mentioned above, eight times out of 10, a raccoon nesting in an attic has a litter of her young tucked away in the same attic. As a result, the mother tends to be highly aware of any foreign or bothersome presence. Consequently, repellents emitting disruptive noises or odors may prove effective as a humane raccoon removal method. However, repellents may not always be effective, and even where they are, they may require a substantial amount of effort before they finally pay off. Nevertheless, the use of repellents is probably the most humane method one can employ to evict raccoons from the household and should, therefore, be a consideration whenever this problem arises. In the case that this does not work, there are always other options to consider.

Traps have always been a simple and efficient method for capturing all kinds of animals. However, traps exist in several different categories with some being lethal. Our focus here is to remove these animals from the premises in a humane manner. As such, live cage traps seem the obvious choice to safely capture and effectively evict relatively harmless animals such as raccoons. Live cage traps work by luring the animal, usually with food, into the trap. As the animal enters the cage, it triggers a mechanism which releases the door effectively caging it inside. A major issue to consider is perhaps the size of the raccoon. If the animal is too large for the cage, it might prevent the trap door from closing. The best solution to this problem may be simply to get the biggest cage you can find. However, another problem looms over this method. It may come as a surprise to many, but it is illegal to trap raccoons in most states, and even where it is legal, one is required to kill and dispose of the animal within his premises at the time of capture; not so humane after all. The reason behind this is to eliminate the risk of relocating rabies vector species.

At the end of the day, it is probably best to contact your local raccoon removal company and have them use the most humane raccoon removal method they can. We used http://www.raccooncontrol.ca